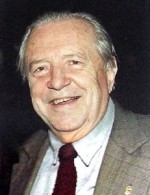 He was born in Moscow in a scientists' family. After 3 years of study at the Power Engineering Institute, he transferred to the Faculty of Biology and Soil of Moscow State University, from which he graduated in 1952, and began working at the Plankton Laboratory of the Institute of Oceanology of the USSR Academy of Sciences as a junior researcher, at the same time he was enrolled in the correspondence postgraduate study of the Institute. In 1955 he defended his Ph.D. thesis, in 1965 - his doctoral dissertation on the topic "Vertical distribution of oceanic zooplankton". From 1967 to 1997 - Deputy Director of the Institute for Science, curator of the bio-oceanological sector and from 1971 - Head of the Plankton Laboratory, and then, since 1985 - Head of the Laboratory of the functioning of the pelagic ecosystems. Simultaneously from 1978 to 2000 he was a professor at the Department of General Ecology and Hydrobiology at Moscow State University.

Mikhail Evgenievich Vinogradov died on May 26, 2007. Buried at the Danilovskoye cemetery in Moscow.