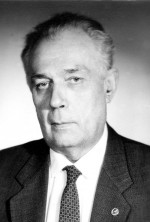 Sergei Leonidovich Soloviev was born on April 12, 1930 in Novgorod, in 1947 he graduated from high school in Leningrad with a gold medal, and in 1953 he completed his studies with honors at the Physics Faculty of A.A. Zhdanov Leningrad State University. Having defended his Ph.D. thesis in 1956 "On the energy classification of earthquakes in the USSR" under the direction of E.F. Savarensky, working at the Institute of Physics of the Earth of AS of the USSR, he immediately joined in the preparation of the Atlas of Earthquakes in the USSR and the monograph Earthquakes in the USSR, for which he wrote a general review of seismicity for the period from the mid-19th century to 1960.

S.L. Soloviev is the author of the first works in domestic practice on the translation of the earthquake classification onto an energy basis. He improved and introduced the Gutenberg-Richter earthquake magnitude scale in the USSR, compared the magnitude with the energy of seismic waves, which made it possible to give an objective characterization of seismicity and made the first map of the quantitative distribution of seismicity in the USSR. He found that the most seismically active region of the country is the Far East and, first of all, Kamchatka and the Kuril Islands (up to 80% of the total number of earthquakes), while Central Asia accounts for no more than 18%, and only 0.2% in the Caucasus.

Since the mid-60s, the scientific interests of S.L. Soloviev moved to the field of tsunami studies as one of the phenomena accompanying strong underwater earthquakes. He takes part in the creation of the Tsunami Rapid Warning Service in the Far East and has been in charge of this service for 15 years. S.L. Soloviev headed the Tsunami Commission of the Interdepartmental Council for Seismology and Earthquake-Resistant Construction under the Presidium of the USSR Academy of Sciences. In 1965-1970 he, together with Guo Ch.N. compiled a fundamental catalog of the tsunami in the Pacific Ocean (consisting of two parts: for the western and for the eastern part of the Pacific Ocean) for the period from the 17th century to 1969, and then a continuation of the tsunami catalog for the entire ocean for 1969-1982, used all over the world in as a reference and a basis for the compilation of modern databases.

After defending his doctoral dissertation "Seismic conditions of the occurrence of a tsunami" in 1970, Soloviev completely switched to studying the tsunami problem. The Tsunami Department was established at the Sakhalin Research Institute of the Far East Scientific Center of the Academy of Sciences.

The emergence of a series of fundamental research carried out under the leadership of S.L. Soloviev in the 60-70s, led to the formation of a separate scientific discipline in geophysics. In the early 70s, Soloviev formulated the basic principles of "hydrophysical forecasting" of tsunamis, based on the advance registration of tsunami waves by bottom tide gauges carried out into the open ocean, and initiated the development of appropriate measurement systems. With the help of a bottom tide gauge developed at the SakhKNII, for the first time in the world it was possible to register a tsunami on February 23, 1980 on the shelf of the Small Kuril Ridge.

S.L. Soloviev and S.S. Lappos headed the wide international cooperation on the tsunami problem, which began with the organization of two Soviet-American tsunami expeditions (1975 and 1978), in which the technique of continuous monitoring of the open ocean level using bottom hydrostatic pressure (level) sensors was developed. Today, these developments have been implemented in the DART tsunami registration system in the United States.

From 1978 until the end of his life, Sergei Leonidovich Soloviev worked at Shirshov Institute of Oceanology of RAS. He was in charge of the Laboratory of Seismology, which he created. Autonomous bottom stations developed under his leadership in 1978-1983 and successful seismological experiments with their use in a number of sea areas (Laptev, Mediterranean and Japanese seas), in the Atlantic and Indian oceans laid the foundation for a new scientific direction - marine seismology.

As a result of the active multifaceted activity of S.L. Soloviev was elected in 1987 as vice-chairman of the working group on tsunami warning services in the Pacific of the Intergovernmental Oceanographic Commission at UNESCO. S.L. Soloviev was also the Deputy Chairman of the Expert Council of the Higher Attestation Commission on Earth Sciences and a member of the editorial boards of several Russian and foreign scientific journals. At the end of 1991, he was elected a full member of the Russian Academy of Sciences.

In the last work "Achievements and problems of marine seismology", which Sergei Leonidovich did not manage to complete, he expressed considerations about the need to create a global system of bottom seismological observations in order to more adequately study the seismicity of the Earth. This consideration is based on the fact that about 90% of all earthquakes occur under the bottom of the oceans and seas, and the network of ground stations is not able to register them without gaps. As a first step in this direction, it was proposed to use old intercontinental communication cables.

S.L. Soloviev published about 500 works, including 10 monographs, he is also the author of 30 inventions. Under his leadership, 1 doctoral and 12 PhD theses were defended.

In recognition of the scientific achievements of S.L. Soloviev European Geophysical Union (EGU) in 1996 established the Soloviev International Medal. The medal is awarded to scientists who have made a significant contribution to the study of natural disasters. The Presidium of the Far Eastern Branch of the Russian Academy of Sciences established the Academician S.L. Solovyov prize for scientific achievements in the study of natural disasters.

Sergei Leonidovich Soloviev was not only a great scientist, but also a highly intellectual, charming person. Throughout his life, he helped not only friends and students, but also everyone who was part of his entourage. Despite the constant workload of scientific work and administrative affairs, until the last days of his life he remained a romantic in science and life, selflessly loved the Kuril Islands, sensitively understood and loved poetry and music.

Sergei Leonidovich passed away on March 9, 1994. He had many friends and students among people of different generations, and while these people are alive, their memory will keep the image of the talented, energetic scientist and organizer of science S.L. Solovyov, and his life path will serve as a standard of love for the Motherland, devotion to science, an example of courage, honesty and kindness for everyone.

View the embedded image gallery online at:
https://ocean.ru/en/index.php/istoriya-v-litsakh/740-solovev-sergej-leonidovich-1930-1994#sigProId97efaaf462
back to top

You are here:HOME/Persons/Sergey Leonidovich Soloviev (1930-1994)