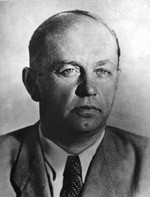 Sysoev Nikolay Nikolaevich (1909-1964) - engineer-oceanologist, deputy director of the Institute of Oceanology (1951-1963), State Prize Laureate (1951). He worked at the State Hydrological Institute in Leningrad, where he headed the experimental design department.

From 1942 to 1946 in the ranks of the Soviet Army, where he held the post of Deputy Head of the Central Design Bureau for Hydrometeorological Instrumentation. After demobilization, he was invited to the Institute of Oceanology as a chief engineer.

Later he created the Department of Marine Engineering and the Department of Marine Expeditionary Works at the Institute. He is rightfully considered the founder of a new direction in oceanology - marine technology or technical oceanology. As one of the organizers of the Institute of Oceanology, he supervised the creation of the largest and most advanced research vessel at that time, Vityaz. Since 1951, during the 12 years of the formation of the Institute, Deputy Director, and after the death of P.P. Shirshov, he has been acting director of the Institute for several years. Sysoev is one of the creators of a new strategy for oceanological research from large research vessels such as floating marine scientific institutes.

For the first time, he also introduced the practice of conducting research work from a ship at anchor with anchorage at a depth of up to 9000 m and more, as well as the methodology of long-term (up to a year or more) research on autonomous oceanological buoys. As the head of the methodological section of the Oceanographic Commission of the Academy of Sciences of the USSR, he did a lot to unify the methods of studying the seas and oceans. In 1951 he was awarded the State Prize of the USSR for a number of works on methods, equipment and oceanological research. Over the years of work at the Institute, he participated in 15 sea expeditions, including 8 ocean ones on the Vityaz. Author of 150 scientific papers and over 70 original oceanographic instruments.

You are here:HOME/Persons/Sysoev Nikolay Nikolaevich (1909-1964)