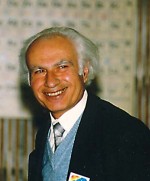 Artem Sarkisovich Sarkisyan was born on September 23, 1926, Gune-Kaler (now the Nagorno-Karabakh region). Graduated from Azerbaijan State University (Faculty of Physics and Mathematics) in 1950.

Corresponding Member since 1981, Academician since 1992 - Department of Earth Sciences.

Specialist in the field of theory and numerical methods for modeling thermohydrodynamic processes in the ocean.

Research in the foundations of the theory and calculation of ocean currents (published in the USSR in 1966, in the USA in 1969), as well as numerical analysis and forecasting of sea currents, brought Sarkisyan world fame.

He was engaged in research and development of models of hydrodynamic processes of synoptic scale in the Black, Caspian, Barents and White Seas.

He prepared 28 candidates and 6 doctors of sciences.

Author and co-author of over 235 scientific articles and 13 books published in Russian, English and Chinese.

He was a Soviet representative in the international program "Investigation of the World Ocean Circulation" (WOCE), a member of the scientific advisory board of the International Center for the Exploration of the Arctic Ocean (Fairbanks, Alaska).

He was awarded the Orders of Friendship of Peoples and of Honor.

He was awarded the Marine Drenov Gold Medal of the Bulgarian Academy of Sciences.