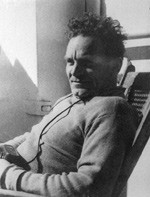 Oceanologist, DSc (Geographical Sciences), professor, State Prize Laureate. He made a huge contribution to the creation and development of the institute.

During the years of World War II, having a respite from the army, he worked as a civilian at the Higher Military Hydrometeorological Institute, where he trained oceanologists for the navy. Dismissed by age in the rank of engineer-captain of the stock of the Navy. He participated in many scientific expeditions, repeatedly led expeditions to the R / V Vityaz, including the first voyage under the IGY program in the Pacific Ocean, in 1951 and 1977 he was twice awarded the title of State Prize laureate.
He was awarded the medal "For the victory over Germany in the Great Patriotic War of 1941-1945.", "For valiant labor in the Great Patriotic War of 1941-1945."

Since 1945, A. D. Dobrovolsky began to give lectures on various aspects of oceanology at the Department of Polar Countries and the Department of Hydrology, Faculty of Geography, Moscow State University. Here in 1948, his joint teaching activity with higher education was resumed with N. N. Zubov.

Since 1947, Alexey Dmitrievich - Senior Researcher, Head of the Department of Physical Oceanography, IOAN. In 1948, he defended his dissertation "Water masses of the North Pacific" for the degree of Doctor of Geographical Sciences. In this work, he formulated a definition of the term "water mass", which later became commonly used. A.D. Dobrovolsky’s doctoral dissertation was extremely relevant for his time, many of its provisions were widely used in the preparation of students, in the work of graduate students and staff. Graduates of the department of many generations well remember the heavily “read” weighty volume of A. D. Dobrovolsky’s doctoral dissertation, which was leafed through much more often than other monographs, but, unfortunately, this scientific work was never published.

In 1949, A. D. Dobrovolsky participated in the first test voyage in the Black Sea of ??the new R / V Vityaz, which became the flagship of the Soviet research fleet. In subsequent years, he led the hydrological research of the Far Eastern seas and the North Pacific, for which in 1951 he was awarded the title of Laureate of the USSR State Prize.

You are here:HOME/Persons/Dobrovolsky Alexey Dmitrievich (1907-1990)