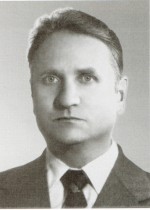 DSc (Geographical Sciences) (1986), Professor (1999), Academician of the Russian Academy of Natural Sciences (1999)
Honored Ecologist of Russia, laureate of the O.Yu. Schmidt Prize (2001)
From 1987 to 2005 - Head of the V.P. Zenkovich Laboratory of Shelf and Sea Shores of  Shirshov Institute of Oceanology of RAS.

He was born in a working class family in the forest village of the Prioksko-Terrasky bison reserve in the Serpukhov region, graduated from the geographical faculty of the Lomonosov Moscow State University (1954). From July 1954 he worked at the Shirshov Institute of Oceanology of the Academy of Sciences: first in its Southern Branch in Gelendzhik (until March 1975), and then in Moscow. Even in his student years, having taken part in expeditions to the Caspian Sea (1950) and Lake Baikal (1953), he opted for the study of the coastal zone of the ocean.

During 51 years of work at the Institute, he conducted about 40 expeditions to the Black, Azov, Barents, Kara, Mediterranean, Caribbean Seas and the North Atlantic. In these seas, 40 dives were made on various manned submersibles. A long voyage on a research nuclear submarine is provided in the Arctic Ocean to solve important fundamental and applied problems. Supervised underwater experiments on prolonged stay of a person under water in hyperbaric devices ("Chernomor", "Sprut"). This work was awarded the Prize of the Presidium of the USSR Academy of Sciences (1968).

He developed an original technique for studying the transfer of sedimentary material into the sea using luminophores, and, for the first time in marine sedimentology, experimentally in natural conditions determined the routes and rates of transfer of sandy material in the sea during waves of various strengths. This technique has been adopted in the USA, England, France, Australia, Poland, Germany, Bulgaria and China. This work at the USSR Exhibition of Economic Achievements was awarded a prize and a silver medal.

For the first time, a conceptual model for the transfer of sedimentary material over the entire width of the shelf of tidal seas has been developed, from which it follows that its bulk (and pollutants too) coming from the continent, with a shelf width of several tens of kilometers, has time to be deposited in its sediments. He formulated the concept, content and tasks of a new direction in the study of the World Ocean - ocean geoecology, as an interdisciplinary direction developing at the intersection of geology, hydrophysics and biology. The scientific foundations of nature management of the coastal zones of the seas of Russia have been developed, the necessity of the integrated management of coastal zones (ICZM) in Russia has been substantiated. He is a pioneer in the integrated management of the coastal zones of the Russian seas. The Law on Coastal Management has been developed.

Based on the performed analysis of all data available at the beginning of the 21st century on the ecological situation in the coastal zone of the World Ocean, it is shown that modern technological progress has led to a change in the structure of pollutant flows, to their accumulation in bottom sediments and the appearance of crisis areas. A forecast is given for the implementation of the doctrine of sustainable development in Russia.

Based on the results of the assessment of the sources and the obtained picture of the radioactive contamination of the seas of the Russian Arctic, the role of radiochemical enterprises in England and France in the pollution of the seas of the Russian Arctic is convincingly shown, it has been proved that radionuclides from the fiords of Novaya Zemlya, heavily contaminated with radioactive substances, have not yet spread to the open sea. Methods have been developed to minimize damage to the environment from this type of pollution ("dumping for dumping"). This method can be applied to chemical landfills, which will provide the country with great cost savings. For this work, he was awarded the Schmidt Prize of the Presidium of the RAS (2001).

The modern economic activity in the coastal zone of the seas of Russia is analyzed, its zoning according to the main pollutants is carried out, the contribution to pollution of each type of economic activity of the republic is determined, recommendations are given for its reduction, the degree of influence of pollution in the seas of Russia on the seas of neighboring countries is determined. The description of the oceanological situation of the place of death of the submarine "Kursk" has been compiled.

An assessment of the environmental impact of offshore oil and gas projects has been made: Blue Stream Tengiz-Novorossiysk, Severnye Vorota, Shtokman gas condensate field, Prirazlomnoye oil field, construction of a terminal in Aniva Bay (Sakhalin). He justified the creation of several artificial beaches and coastal protection structures in the recreational areas of the Black Sea. The creation of such beaches in Gelendzhik and Anapa brought the country tens of millions of rubles in profit. He supervised and took personal part in environmental engineering surveys on the routes of marine civil and defense cables: Kamchatka-Magadan, Crimea-Bulgaria, Italy-Turkey-Ukraine-Russia, (ITUR), the Dzhubga-Sochi-Poti government line. Conducted geotechnical surveys for the construction of nuclear power plants in friendly countries.

In 1991, he was awarded the honorary title "Honored Ecologist of the Russian Federation" (2000), the Special Prize of the World Confederation of Underwater Activities at UNESCO and the O.Yu. Schmidt Prize of the Presidium of the Russian Academy of Sciences (2000) for his successes in the protection of the marine environment and nature management. , several (3) VDNKh medals, incl. - gold. As a result of his scientific, pedagogical and educational activities, he delivered about 1000 lectures in Russia, China, Bulgaria, Poland, Libya, Cuba; 9 candidates of sciences were prepared.

He obtained unique field data on marine sedimentology, developed the theoretical foundations of ocean geoecology and created a scientific school of oceanologists to assess the anthropogenic impact on the surrounding marine environment, to solve the fundamental problem of the ratio of natural and anthropogenic components in the development of the marine ecosystem.

He wrote about 350 works, including 12 monographs (of which 6 are personal).

Member of the Supreme Environmental Council under the State Duma of the Russian Federation (since 1994), one of the developers of the package of maritime laws, deputy chairman of the national Working Group on the LOICZ-Laud project (since 1994), holder of grants from the D. and K. MacArthur Foundation (1995 and 1996), the Vernadsky Non-Governmental Foundation (1999).

He created a separate branch of science - the geoecology of the sea.

Since 2009, the section "Geoecology of Seas and Oceans" of the International Scientific Conference on Marine Geology has been named after N.A. Aibulatov.

You are here:HOME/Persons/Aibulatov Nikolay Alexandrovich (1930-2007)