Video studio of the IO RAS
in social networks

The history of the creation of the Video studio

The video studio "IO RAS" in its modern form was founded at the end of 2008. However, even the founders of the Institute had a clear understanding that scientific research of the ocean would be incomplete without photography and filming.

The first photographer of the Institute should be considered Ivan Dmitrievich Papanin, who, in addition to the functions of the head of the legendary station North Pole-1 (SP-1) on a drifting ice floe in 1937, practiced photography on the expedition.

Here is what he writes in his autobiographical book Life on an Ice Floe: After long rainy days on July 24 (1937), the sky cleared and we knew where we were: 88 degrees 3 minutes north latitude, 6 degrees east longitude. It was in this place that unique photographs were taken. We were in a hurry: while the polar day, clear sunny weather, we need to photograph pictures of our life, work. I tried my best: for nothing, I spent so much time learning. It turned out, in my opinion, well.

The first professional photographer was the Deputy Director of the Institute for Expeditions from 1948 to 1951.

Since the twenties of the twentieth century, a movie camera and a photographic camera have become indispensable participants in all significant large expeditions in the USSR. The ability to handle photographic equipment was a hallmark of travelers of that time. Another of the "founding fathers", Georgy Alekseevich Ushakov, was an excellent master of the camera. He left an archive of photographic plates taken during his expeditions to Wrangel Island in 1926-28 and to Severnaya Zemlya in 1930-32. On the basis of its archive, the IO RAS video studio in 2010 released a documentary film “One Hundred Hides of Unkilled Bears”, which tells about the exciting expedition of the Ushakov's Quartet to the Severnaya Zemlya.

In the first decades of the Institute's existence, this direction has received powerful development. You can name: Ionin, Marakuev, Budanov, Zenkevich - all of them were seriously engaged in underwater photography and even underwater filming.

In the magazine "Photography", which was quite popular in its time, in the 50-70s of the last century, articles on special types of photography were repeatedly published, under which were the names of employees of our Institute.

Nikita Lvovich Zenkevich not only improved underwater photography, but also professionally filmed with a 35 mm film camera on the deck of the famous flagship of Soviet oceanology, the RV Vityaz. In 1956, at the studio of the Popular Science Film, several issues of the Science and Technology newsreel were created, based on Zenkevich's shooting in the first expeditions of the Vityaz. Today, thanks to these films, we can perfectly imagine how the work of scientists went at the “dawn of Soviet oceanology”.

As you know, it was a series of underwater photographs of the top of the seamount Ampere, made by engineer V. I. Marakuev, that became the reason for the next version of the location of the mythical Atlantis. This is how visual art once again had a decisive impact on science.

Jacques Yves Cousteau is the world leader in the field of crossing cinema and oceanology. He visited the Institute, where he spoke in a large conference hall with a report at the Scientific Council. He visited Vityaz, the flagship of Russian oceanology, which belonged then to our Institute.

After the triumphant appearance on world cinema screens of the films of Jacques Yves Cousteau - the genius of science and cinema - in the USSR during the 60-80s a number of films about the study of the ocean, about expeditions to distant exotic shores were created. Including several films are released by order of the Institute of Oceanology, created on the basis of filming in our expeditions at professional documentary film studios: "Land under the Ocean", "The Eyes of a Ship", "Expedition Goes Into the Ocean", "Maclay Coast", "Biological Resources of the ocean", "Academician Kurchatov - the flagship of Soviet science" and others. Scientists of the Institute become the initiators of their creation, scriptwriters or scientific consultants: Udintsev, Aksenov, Monin, Moskalev and others. Professional experienced directors and cameramen work on the films, in particular, the famous documentary filmmaker Zguridi.

In the mid-60s, the Institute of Oceanology entered its "golden era". Practically, unlimited funding of science from the authorities made it possible to carry out expeditions unprecedented in scale in all regions of the World Ocean. The Institute received the largest scientific fleet in the Academy of Sciences, several unique devices for underwater observations were built: underwater laboratory houses "Chernomor", diving saucers with people on board the "Paisis" (deep-sea manned submersibles with a diving depth of up to 2000 meters). All this made it possible to shoot a rich expeditionary film material.

Some of the Institute's expeditions survived in the form of amateur newsreels, and never acquired their finished form. Many of the most interesting pages of Russian history remained only in the photo. Today, the IO RAS Video Studio is working with archives of photo and film materials, collecting them, organizing and converting them into digital format. Working with the archive is a constant source of new creative ideas for future popular science films.

From the beginning of the nineties of the twentieth century to the present day, Russian science is going through difficult times. At the same time, more and more interest is shown in society in popular science cinema. It is no coincidence that underwater exploration became a part of the famous film "Titanic" by James Cameron.

The immersion on the Titanic with the help of submersibles "Mir" from the RV Akademik Mstislav Keldysh became a vivid scene of one of the highest-grossing and heartfelt films in the history of world cinema. In the mid-nineties, "Titanic" by James Cameron made the inhabitants of our country proudly pronounce the name of the Institute of Oceanology. The underwater footage made with the manned submersibles "Mir" belonging to the Institute, to this day amaze viewers all over the world with bright and sad shots of a giant ship, forever buried in the ocean abyss.

Already in the early 2000s, the cooperation of the Mir's team under the leadership of A.M. Sagalevich and the world's largest film companies (such as IMAX) contributed to the emergence of a number of amazingly spectacular documentary-staged films, including films about the underwater world, shot in the format 3D.

It should not be overlooked how often oceanologists appear in cyclic broadcasts on central television channels. Few people know that Alexander Vasilyevich Zhivago was one of the first hosts of the “Film Travel Club” program, which was so popular in the past (the name itself speaks for itself). Lev Ivanovich Moskalev is a frequent guest in Nikolai Drozdov's program "In the world of animals". His stories about marine life are always fascinating. Several years ago, an extensive series of programs about the riddles and secrets of science “Atlanta. In Search of Truth ”, they were led by Alexander Moiseevich Gorodnitsky. All of these are respected scientists and longtime employees of the Institute.

The beginning of our history

A long history of fruitful friendship between oceanology and cinematography against the background of a significant simplification of the filming process led to the idea of ​​creating its own video studio at the Institute. In 2004, in the technical sector, on the initiative of the director of the Institute S.S. Lappo, scientific secretary M.M. Marina and deputy director N.A. Rimskiy-Korsakov was the first to undertake the initiative of regular video filming of expeditions. As a result of several years of work, more than a dozen video reports have appeared, submitted to various ministries and departments of Russia, including the Ministry of Emergency Situations. The materials of the video reports were in demand on the central TV channels of Russia, a number of proposals were received from foreign TV channels and studios with a request to provide them with video materials to cover the activities of Russian science abroad.

In 2008, the successful initiative of individual enthusiasts was supported by the new director of the Institute - Academician R.I. Nigmatulin. The studio's employees were actively involved in the work, and soon a seemingly unusual, but long-needed specialized room for the Institute appeared on the site of the abandoned warehouse.

At the beginning of 2010, the IO RAS Video Studio began its full-fledged work. The funds invested by the Institute in repairs were not in vain. We received a new multifunctional room suitable for several employees to work, as well as for professional video and photography. For this, during the renovation, the walls and the floor were finished in a special way, sound insulation was strengthened. The existence of the studio greatly facilitates the work of the film crews of television channels, who constantly visit our walls to obtain expert advice from ocean scientists. 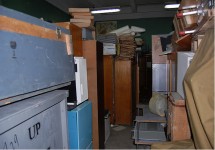 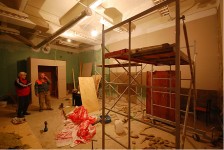 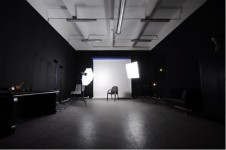 And of course, we ourselves are constantly filming our employees. In other words, we are writing the modern history of science on video media. The video studio "IO RAS" is equipped with professional filming and editing equipment. The studio has its own video editing room. Sets of lighting devices for pulsed and constant light allow to expose various lighting schemes, including for staged scenes. The system of interchangeable backgrounds allows to shoot under a chroma key.

back to top
You are here:HOME/Video /The history of the creation of the Video studio